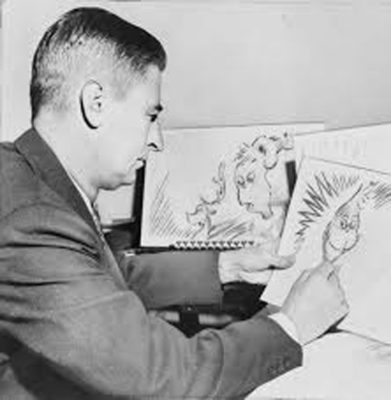 Born 2 March 1904 in Springfield, Massachusetts. Theodor Seuss Geisel, creator of The Cat in the Hat and How the Grinch Stole Christmas, was born at Springfield, MA. Known to children and parents as Dr. Seuss, his books have sold more than 200 million copies and have been translated into 20 languages. His career began with And to Think That I Saw It on Mulberry Street, which was turned down by 27 publishing houses before being published by Vanguard Press. His books included many messages, from environmental consciousness in The Lorax to the dangers of pacifism in Horton Hatches the Egg and Yertle the Turtle’s thinly veiled references to Hitler as the title character.

He was awarded a Pulitzer Prize in 1984 “for his contribution over nearly half a century to the education and enjoyment of America’s children and their parents.” He died 24 September 1991, at La Jolla, CA.