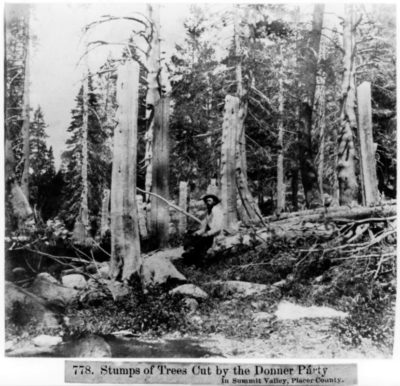 Stumps of trees cut by the Donner Party in Summit Valley, Placer County, 1866. Courtesy of the United States Library of Congress‘s Prints and Photographs division under the digital ID cph.3a28397

The pioneering Donner party, a group of 90 people consisting of immigrants, families and businessmen led by George and Jacob Donner and James F. Reed, headed toward California in 1846 from Springfield, IL, in hopes of beginning a new life. They experienced the normal travails of caravan travel until their trip took several sensational twists. Indian attacks and winter weather, which forced them to interrupt their journey, led to famine and outright cannibalism, which took their toll on members of the party, whose numbers dwindled to 48 by journeys end.