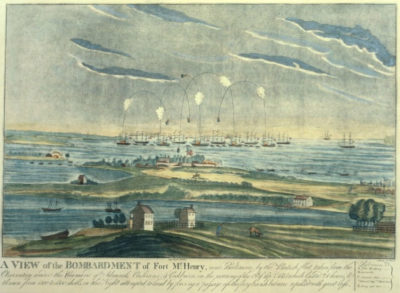 Defenders Day is a public holiday in Maryland to mark the 1814 bombardment of Fort McHenry in Baltimore during the War of 1812.

Image: Wikimedia Commons, Caption reads, “A VIEW of the BOMBARDMENT of Fort McHenry, near Baltimore, by the British fleet taken from the Observatory under the Command of Admirals Cochrane & Cockburn on the morning of the 13th of Sept 1814 which lasted 24 hours & thrown from 1500 to 1800 shells in the Night attempted to land by forcing a passage up the ferry branch but were repulsed with great loss.”