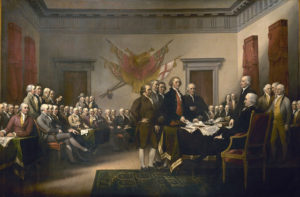 July 4, 1776. The Declaration of Independence was approved by the Continental Congress: Signed by Order and in Behalf of the Congress, John Hancock, President, Attest, Charles Thomson, Secretary. The official signing occurred Aug 2, 1776. The manuscript journals of the Congress for that date state: The declaration of independence being engrossed and compared at the table was signed by the members.