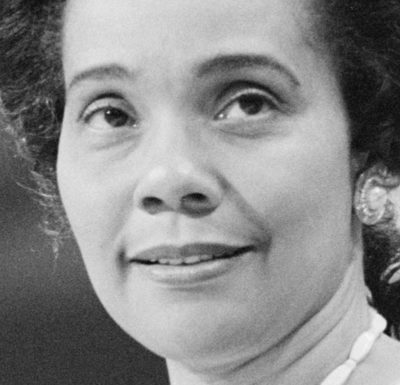 On 27 April 1927, Coretta Scott King, the wife of Dr. Martin Luther King, Jr, was born on a farm near Heiberger, AL. She picked cotton as a child but was able to go to college, where she met and married the young minister-turned-civil-rights-activist. She worked by his side, establishing Freedom Concerts and other social-change movements, while also raising the couple’s four children. After King’s 1968 assassination, she took on his mission, founding the Martin Luther King Jr Center for Nonviolent Social Change in Atlanta (now just called The King Center), and also spearheading the efforts to have a national holiday established in her late husband’s honor. The American Library Association established a prestigious children’s literature award for African-American writers and illustrators in her name in 1970, and in her later years she was a tireless advocate for gay and lesbian rights. She died at Rosarito, Mexico, Jan 30, 2006.