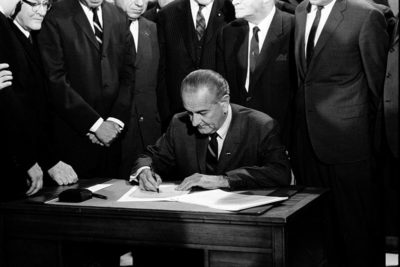 On 11 April 1968, exactly one week after the assassination of Martin Luther King, Jr, the Civil Rights Act of 1968 (protecting civil rights workers, expanding the rights of Native Americans and providing anti-discrimination measures in housing) was signed into law by President Lyndon B. Johnson, who said: “[ T] he proudest moments of my presidency have been times such as this when I have signed into law the promises of a century.”