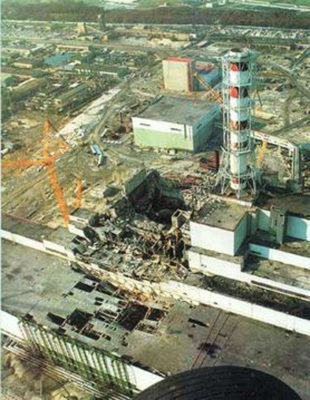 On 26 April 1986. At 1: 23 AM, local time, an explosion occurred at the Chernobyl atomic power station at Pripyat in the Ukraine. The resulting fire burned for days, sending radioactive material into the atmosphere. More than 100,000 persons were evacuated from a 300-square-mile area around the plant. Three months later 31 people were reported to have died and thousands exposed to dangerous levels of radiation. Estimates projected an additional 1,000 cancer cases in nations downwind of the radioactive discharge. The plant was encased in a concrete tomb in an effort to prevent the still-hot reactor from overheating again and to minimize further release of radiation.