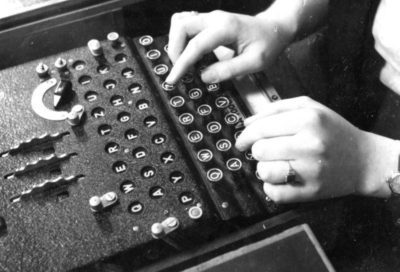 9 May 1941. During WWII, when a German U-110 submarine attacked a British convoy, two British vessels, the Bulldog and Aubretia, were able to retaliate so quickly with depth charges that the submarine was disabled and unable to dive. With the submarine captured, British sailors investigated the radio room and discovered the typewriter-like Enigma, a ciphering machine that enabled safe German communication, and documents of tables that helped explain how it worked. The U-110 s capture was kept secret, and British cryptographers used this break to begin unraveling German code during the war.