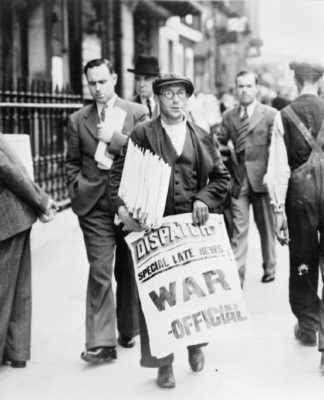 Sept 3, 1939. British ultimatum to Germany, demanding halt to the invasion of Poland (which had started at dawn on Sept 1), expired at 11 AM, GMT, Sept 3, 1939. At 11: 15 AM, in a radio broadcast, Prime Minister Neville Chamberlain announced the declaration of war against Germany. France, Canada, Australia, New Zealand and South Africa quickly issued separate declarations of war. Winston Churchill was named First Lord of the Admiralty. Read more at http://www.history.com/this-day-in-history/britain-and-france-declare-war-on-germany.