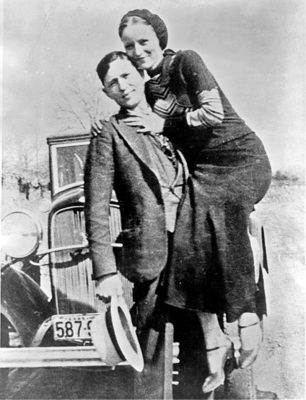 On 23 May 1934, the two-year crime spree of Bonnie Parker and Clyde Barrow, bank robbers accused of at least 12 murders, came to an end when a law enforcement posse led by Frank Hamer opened fire on the couple in an ambush at Gibsland, Louisiana. The couple had operated in Texas, Oklahoma, Missouri, Louisiana and other states, and had sent ballads to local newspapers chronicling their exploits, making them two of the most notorious and romanticized of many Depression-era gangsters. Some 20,000 people lined up to see the body of Clyde Barrow put on display in a mortuary in downtown Dallas, Texas.