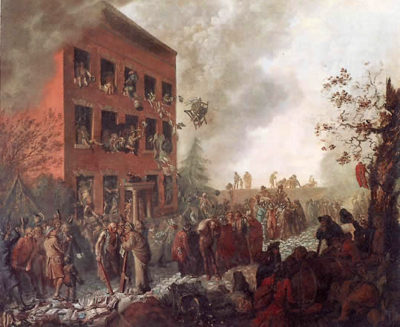 July 14, 1791. Following a dinner celebrating the second anniversary of the fall of the Bastille, an angry mob rioted at Birmingham, England. The main target of their wrath was the home of scientist (discoverer of oxygen) Joseph Priestley, who was unpopular because of his religious views and his approval of the American and French revolutionary causes. The mob ruled Birmingham for three days, burning Priestley’s home and laboratory as well as the homes of his friends. Priestley, in disguise, and his family narrowly escaped with their lives. They lived for a time at London before moving in 1794 to America.