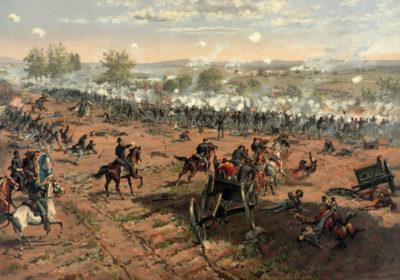 July 1 3, 1863. After the Southern success at Chancellorsville, VA, Confederate general Robert E. Lee led his forces on an invasion of the North, initially targeting Harrisburg, PA. As Union forces moved to counter the invasion, the battle lines were eventually formed at Gettysburg, PA, in one of the Civil Wars most crucial battles. On the climactic third day of the battle (July 3), Lee ordered an attack on the center of the Union line, later to be known as Pickett’s Charge. The 15,000 rebels were repulsed, ending the Battle of Gettysburg.

After the defeat, Lees forces retreated back to Virginia, listing more than one-third of the troops as casualties in the failed invasion. Union general George Meade initially failed to pursue the retreating rebels, allowing Lees army to escape across the rain-swollen Potomac River. With more than 50,000 casualties, this was the worst battle of the Civil War.

Image Credit: By Original scan: Library of Congress – N.B. The description the LoC gives manages to combine George Pickett (Confederate, leader of the charge) and Winfield Hancock (Union, defended against the charge) into one person, George Hancock. This error has been reported., Public Domain, https://commons.wikimedia.org/w/index.php?curid=46097349