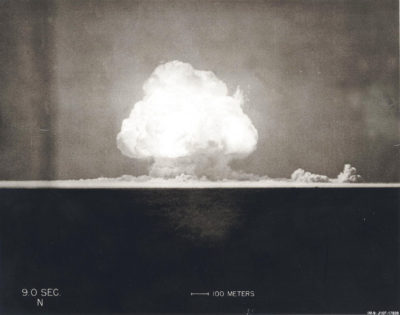 July 16, 1945. In the New Mexican desert at Alamogordo Air Base, 125 miles southeast of Albuquerque, the experimental atomic bomb was set off at 5: 30 AM. Dubbed Fat Boy by its creator, the plutonium bomb vaporized the steel scaffolding holding it as the immense fireball rose 8,000 feet in a fraction of a second ultimately creating a mushroom cloud to a height of 41,000 feet. At ground zero the bomb emitted heat three times the temperature of the interior of the sun. All plant and animal life for a mile around ceased to exist. When informed by President Truman at Potsdam,Germany, of the successful experiment, Winston Churchill responded, “Its the Second Coming in wrath!”