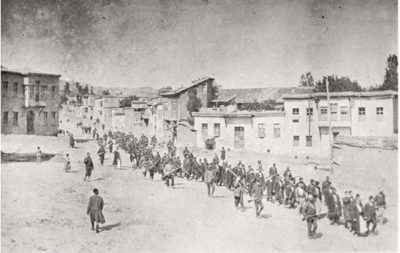 ANNIVERSARY. Apr 24, 1915. Fearing that the long-oppressed Armenian subjects would side with Russia and the Allies in WWI, authorities in the Central Powers– aligned Ottoman Empire rounded up and imprisoned 250 Armenian intellectuals and community leaders in the capital of Constantinople on Apr 24, 1915, Red Sunday, a date recognized as the start of the Armenian Genocide. Over the next six years, through 1921, beyond the end of the war, between 500,000 and 1.5 million Armenians and other minorities were systematically killed through mass burnings, drowning, toxic gas, lethal inoculations, extermination camps and death marches into the Syrian desert.