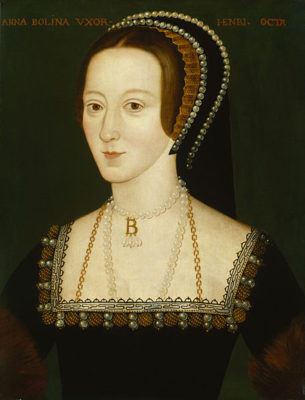 Born around 1501, Anne Boleyn captured the eye of England’s King Henry VIII in 1527. Her demand that he make her a wife, not a mistress, caused the married Henry’s break with the Catholic Church (which didn’t allow divorce), which in turn led to decades of religious turmoil in England. Henry had his marriage to Catherine of Aragon annulled and wed Boleyn in1533. Boleyn’s inability to bear a male heir (although her daughter with Henry was the future Queen Elizabeth I) and court intrigue caused her arrest on charges of adultery. She was executed by sword on 19 May 1536 at the Tower of London. The morning of her execution she said, I heard say the executioner was very good, and I have a little neck.