All In The Family Television Premiere – Anniversary 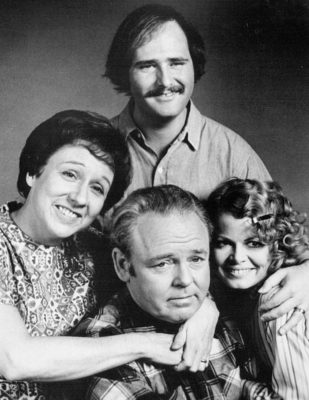 Jan 12, 1971. Based on the success of the British comedy “Till Death Us Do Part,” Norman Lear created CBS’s controversial sitcom “All in the Family.”

The series was the first of its kind to realistically portray the prevailing issues and taboos of its time with a wickedly humorous bent. From bigotry to birth control, few topics were considered too sacred to discuss on air. Ultraconservative Archie Bunker (played by Carroll O’Connor) held court from his recliner, spewing invective at any who disagreed with him. Jean Stapleton portrayed Archie’s dutiful wife, Edith. Sally Struthers and Rob Reiner rounded out the cast as Archie’s liberal daughter and son-in-law, Gloria and Mike “Meathead” Stivic.