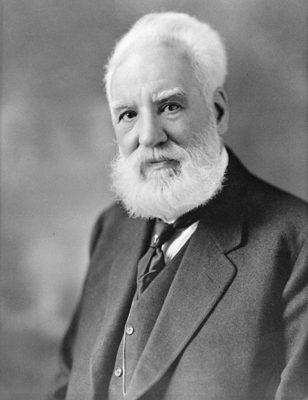 Born on 3 March 1847. Inventor of the telephone, born at Edinburgh, Scotland, Bell acquired his interest in the transmission of sound from his father, Melville Bell, a teacher of the deaf. Bell’s use of visual devices to teach articulation to the deaf contributed to the theory from which he derived the principle of the vibrating membrane used in the telephone. On Mar 10, 1876, Bell spoke the first electrically transmitted sentence to his assistant in the next room: “Mr Watson, come here, I want you.”

Bell’s other accomplishments include a refinement of Edison’s phonograph, the first successful phonograph record and the audiometer. He also continued exploring the nature and causes of deafness. He died near Baddeck, NS, Canada, 2 August 1922.