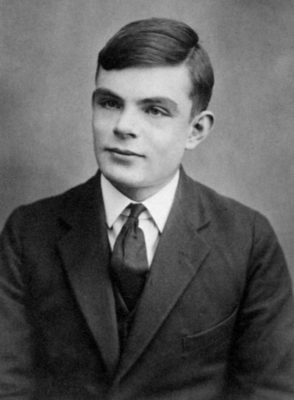 Born at London, England, Alan Mathison Turing conceived in 1936 the Turing Machine, an abstract information-processing mathematical model that foreshadowed digital computers. During WWII, he was a member of the top-secret code-breaking team at England’s Bletchley Park. The decoding team saved incalculable Allied lives. Turing was made a member of the Order of the British Empire for his wartime service. In 1945, Turing designed the Automatic Computing Enginewhat would have been the first digital computer had it been built. In the 1950s, Turing devised the Turing Test that would determine the success of an artificial intelligence machine (of whether it was thinking).

Turing was stripped of his government security clearance after being convicted in 1952 for gross indecency Turing was openly gay and homosexuality was a crime in England. He committed suicide June 7,1954, at Wilmslow, England.

Image: In public domain via Wikipedia.org