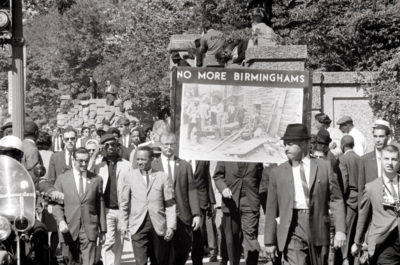 Sept 15, 1963. In a horrific episode of the civil rights struggle, a bomb blast in the basement of the 16th Street Baptist Church in Birmingham, AL, killed four girls preparing for church: Denise McNair, Carole Robertson, Cynthia Wesley and Addie Mae Collins. Previously, the church had been the center for marches led by Dr. Martin Luther King, Jr. Three suspects were brought to trial in 1977, 2001 and 2002 and found guilty. Read more at http://www.nps.gov/nr/travel/civilrights/al11.htm.

Image: US Library of Congress